20 years ago almost to the day, a bunch of Seawind owners got together to test their sailing prowess and race their cruising catamarans around the iconic Pittwater, just north of Sydney Harbour. Gathering at the Basin camping ground afterwards, tails were told over beers and a BBQ and friendships were born. The concept caught on and the Seawind Pittwater Regatta became an institution growing to become one of the largest multihull regattas in Australia and one of the largest brand gatherings of its kind in the world with around 35 Seawinds racing in its peak. 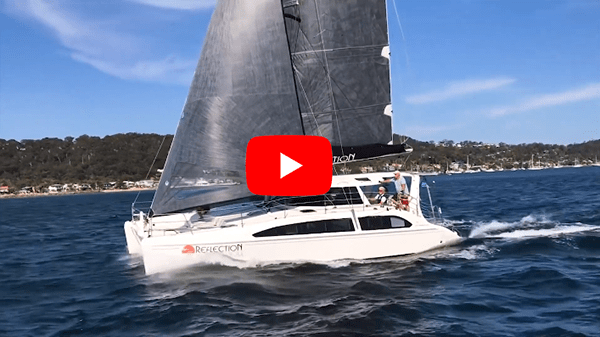 After a hiatus from Pittwater for several years, it was considered fitting that we would return to this spectacular cruising location once again and retrace the old racing program established two decades ago to see why this was so special.

So following many months of planning and organising by the regatta committee, formed by fellow Seawind owners, we had gathered 22 boat entries and around 80 people to join us for a weekend of sailing.

Some boats were already on Pittwater, however many had to travel from locations including Port Stephens, Port Hacking and Jervis Bay. I sailed our little Seawind 1000 ‘Seabbatical’ up from Sydney Harbour one afternoon solo taking advantage of the daylight savings sun and cruising in company with a Seawind 1250 ‘Catty Shack’. A nice little sail up the northern beaches with a soft sun. 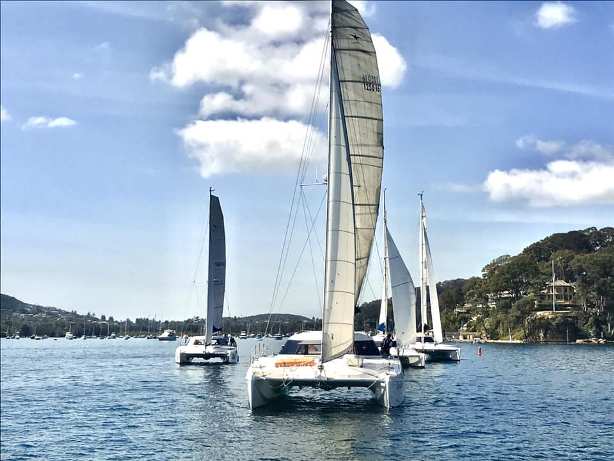 However no one had travelled as far as Rich Carey onboard his Seawind 1160 ‘X86’ who had recently arrived on Pittwater following his solo transpacific and previous transatlantic crossings from the Med where he had been cruising for some time. Though his boat isn’t really optomised for racing, it is optimised for offshore passage making shorthanded with extra hand holds, a windvane (rare to see on cats) and a whole bunch of equipment to help navigate the seas. Rich is now selling his boat and hopes his boat will go to another cruising adventurer (see www.multihullcentral.com for details). 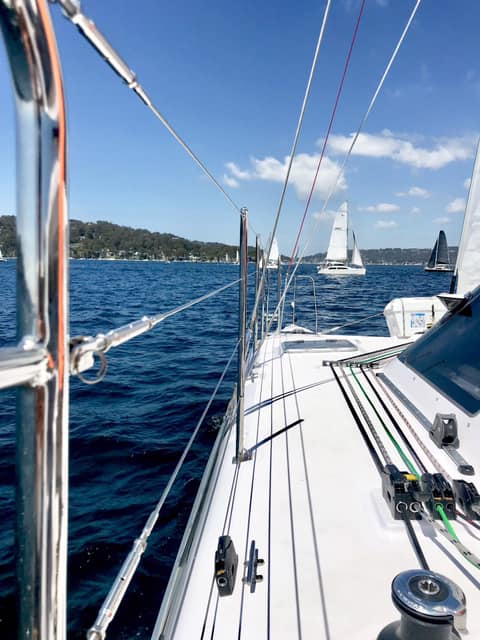 As you sail around Barrenjoey Heads and into Broken Bay that is the three way intersection between Pittwater to the south, the Hawkesbury to the west and Ettalong and Gosford to the north, you have the impressive Lion island greeting you on arrival like a Sphinx in front of the great Pyramids. This is a destination rather than just a location and I can appreciate why Pittwater has always been a favourite amongst yachties.

Following a short invitation race, the flotilla assembled Friday afternoon on the 26th of October at the Refuge Cove on Pittwater and gathered onshore at the Basin where a large marque had been erected in the yard of a heritage listed cottage from former settlers.

The basin is a little piece of paradise, with what seems like hundreds of moorings in a protected bay, a sandy beach to pull your dinghy up, overshadowed by large Norfolk Pines with a large flat grassy area where campers and kangaroos intermingle. On the inside there is a large saltwater lagoon which is a favourite in summer time for kids to go swimming in. Its very peaceful here. Its near on impossible to get here anyother way than boat so there are no cars, no traffic…just the sound of birds in the trees and a gentle breeze. Its no wonder the Basin was picked as the location to catch up.

We gather for a Paella freshly cooked onsite in front of us and it was refreshing to see so many familiar faces that I haven’t seen for some time. After a welcome and short presentation, the ‘Seabbatical Short Film Festival’ is played in the marquee on a large screen providing some inspiration for future adventures. 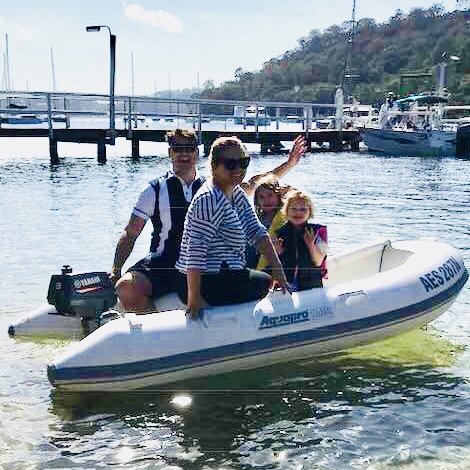 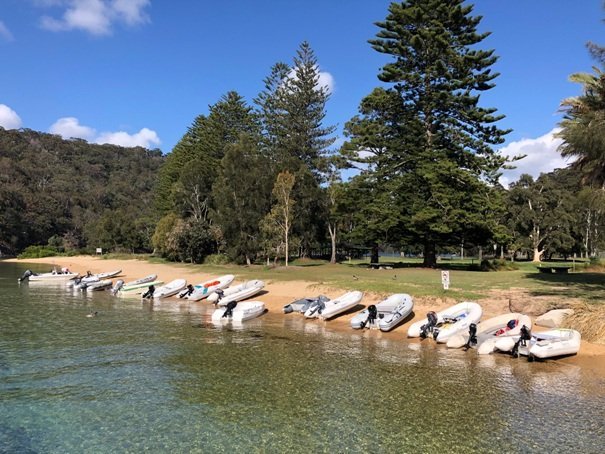 The next morning is a stunner with perfect blue skies, but not much wind. The group gather for bacon and eggs at the cottage and Michael Meehan provides a briefing for the two races that lay ahead.

Sailing in next to no wind is a great test for not only a catamarans performance, but also your own sailing skills to find clean air and predict where the wind will fill in from as the NE builds through the day. The congested start line meant you could almost jump from one boat to another which prompted some friendly sledging between crews. However it was impressive how well the Seawinds can sail in the lighter conditions and in no time the fleet were making their way around the course. 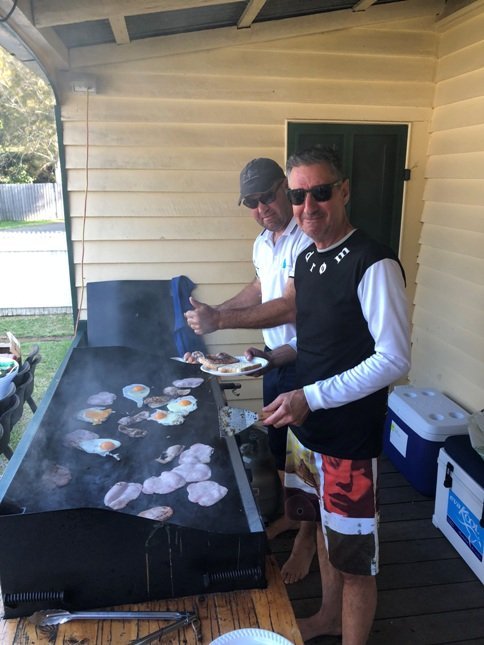 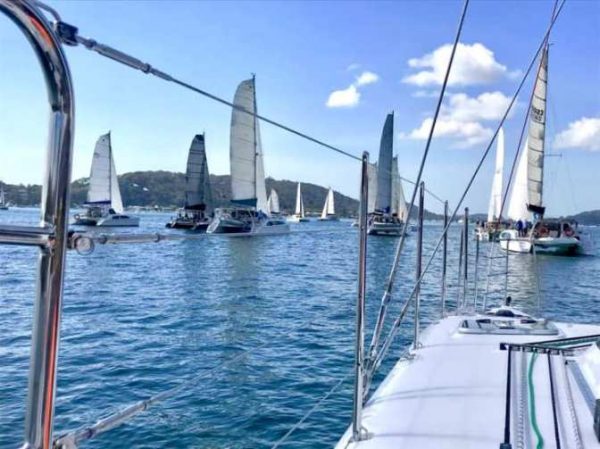 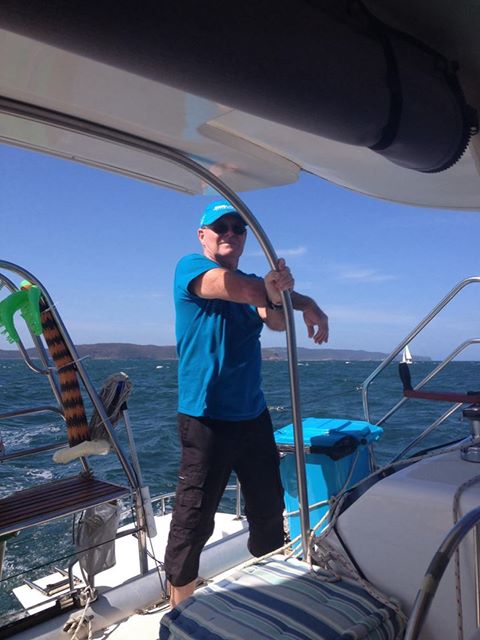 Finishing near Towler’s Bay, another pretty location with lots of moorings, the fleet dropped in for lunch. We took the kids into the beach on shore for a swim in the crystal clear water, before returning for a BBQ lunch and a chat with our neighbours that we had rafted up against next door onboard Seawind 1000 ‘Tranquillity’. They had just won the first race and were keen to get out again for the second race as the NE was building quickly.

Race two was action packed with 20 knots filling in from the NE which mean a couple of tacks which separated the and a long march down to Lion Island and back. The wind against a strong outgoing tide in Broken Bay really tested the little Seawind 1000 as we had a few green waves over the bow but it punched through undeterred. We had pace but couldn’t quite catch tranquillity who held onto the lead the entire race, but they were hunted down by Seawind 1160 LITE ‘Seaddler’ and Seawind 1250 ‘Catty Shack’ who were both flying on the return off the breeze.

Finishing at the Basin the fleet resumed some sundowners before donning the formal attire (Hawaiian Shirts) for the presentation later that night…more food rolled out from our caterers and the cool drinks on ice flowed. 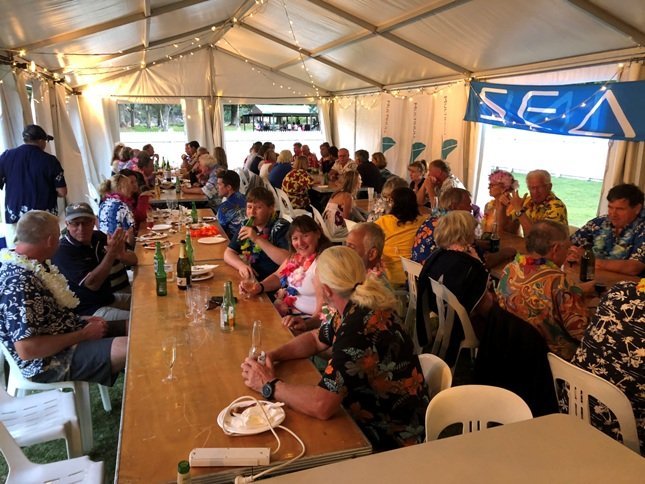 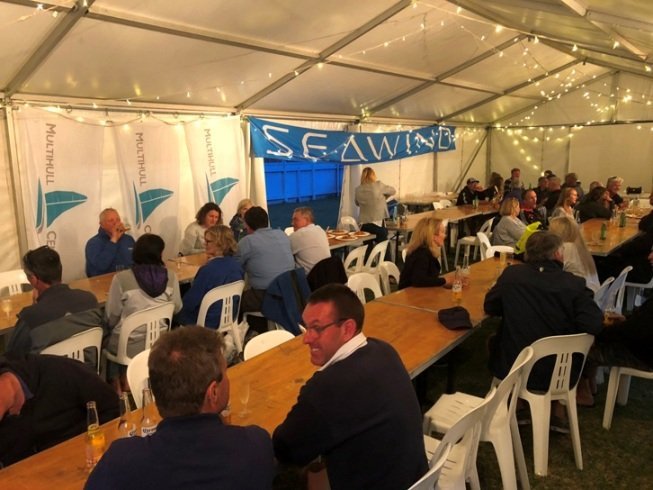 2 thoughts on “A sense of belonging”